Young talent Olivia Lynn to release ‘Ain’t It A Shame’ 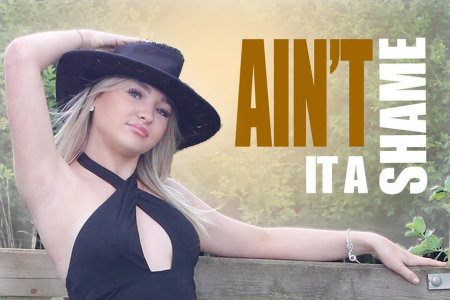 Throughout the course of her young musical career, OLIVIA LYNN has won over the hearts of music lovers from all walks of life. Her love for country started at a very young age when she was introduced to Dolly Parton’s music by her Nana. Yet, in teenage years Olivia found ‘POP Music’ and New Country. So, always wanting to become an influential singer, she threw the boundaries aside and merged her two music loves into one mix, with her unique Country Pop Sound. This has led to much recognition, including being awarded Luton’s Young Achiever, 2020.

In recent months Olivia has been juggling recording new tracks in the studio and embarking in Musical Theatre, playing ‘Maddie Jackson’ in the critically acclaimed show, ROOM 46, which she is looking forward to touring next year.

“Over the past year I have developed my music to a different level. Although my other tracks, that I am proud of, have given me a kick-start in my career, the new songs that I am releasing portray a new me. They are very strong, raw and definitely a New Country sound.”

Being a passionate advocate of women’s rights, how women are perceived, and writing from personal experiences, ‘Ain’t It A Shame’ was written when an ex boyfriend criticised Olivia for what she was wearing.

“Women should be able to feel confident, and not made to feel like they are doing something wrong, or giving out the wrong signals. We are strong and we’ve been fighting for a voice for hundreds of years”.

[Olivia Lynn, speaking about ‘Ain’t It A Shame’]

“‘Ain’t It A Shame’, will be almost a year to the day I release my debut track Moden Girl which went to #1 in the UK. Reaching the top spot with my first single was an amazing feeling, but having written this new song myself, I think I will literally burst if I get even close to the top spot!”