Ziggy Alberts: An Adventure to Last a Lifetime 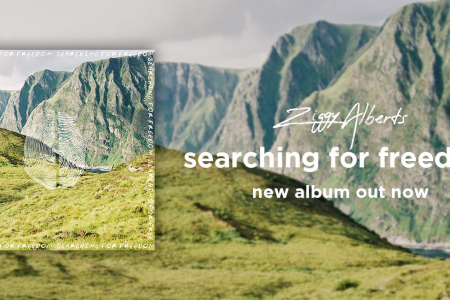 Ziggy Alberts is a free spirit, something that is evident on his latest record ‘Searching For Freedom’. His music is the embodiment of exploration, from the interesting acoustic guitar parts that support his captivating, storytelling lyrics to his international approach to the recording process. The record, due out on March 19th, will be his fifth studio album and after starting his career off busking to touring globally, Alberts has come to realise that he is on one big adventure that will last a lifetime. Those early days, picking up a guitar for the first time and busking around town, must seem a while ago now to Alberts who was always a bit of a loveable vagabond just searching for what he should take up next.

Songs From the Surf

“I started playing guitar 10 years ago, the first year after I had graduated – I was looking into different career paths, but very quickly I started pursuing freelance journalism and music while working at a music bar and at a coffee shop. My early decision making was if I did a couple more shows a week, I would be happier, just as broke and have more time to surf!” Alberts searched for freedom in both music and in the waves, something which he still does now. In fact, some of the songs on this record were inspired whilst out in the surf. He’s had more time to do that recently and in this crazy world we’re currently residing in, Alberts hopes this record will be the antidote that many need right now. “The record ‘Searching For Freedom’ probably wouldn’t exist if it hadn’t been for the pandemic. Many of the songs wouldn’t have as deeper meaning, and likely wouldn’t have been written.” The pandemic gave Ziggy Alberts a chance to reflect on the life he leads and get back to his roots in many ways.
“I chose this album title because I think it is the overarching theme of both the record and human existence. I believe the pursuit of love and freedom connects everyone on the planet.” This desire to connect through music lead him to write some of the most deeply personal songs that he’s written. Alberts pours his heart and soul into the track Circus as the song takes us on a lyrical journey, “I wanted listeners to look up four minutes later and wonder where they went.” Similarly the title track, the last Ziggy Alberts wrote for the project, is perhaps one of the most poignant on the album as he takes us on a quest of self-identity. It is a testament to the formidable songwriter that he is. When someone has that raw talent it’s sometimes indescribable even to themselves! “The writing process is different every time, but in general, the process of finding a melody is kinda like catching it as it flies on past through the universe, whilst my lyrics are much more intentional. My instrumentation is somewhere between these two. I feel it is a great balance!”

Finding his own voice

For all the hard hitting, thought provoking songs, Ziggy Alberts isn’t afraid to have a little fun and get creative within his writing, whilst discussing the strangest things to write about in a song Ziggy revealed the strangest line he’d ever written features on this upcoming record. “There is a line in track 11 of the new album – a song called feeling you – that talks about “dogs out on the street chasing satellites” – which is about UFO’s and the likely satellite pollution astronomers and common folk could face in the future when looking up at the stars.”
The unique sound of Alberts’ music has gained him a global fanbase, he attributes this to the array of influences he had growing up “Mum listened to the likes of Salt’n’Pepa and Destiny’s Child, while my father listened to James Taylor and The Eagles. I think that explains a lot about my music. I listen to just about everything these days. Right now, I am just listening to my favourite records of Ben Howard, Jack Johnson, Asgeir, Hozier and Matt Corby.” Many of those influences can be heard in this latest album but its Ziggy Alberts ability to turn a phrase that sets this record aside from the rest of the pack. Alberts’ looks forward to getting back to where it all started, performing live and connecting in person with his fans. For now he delivers a record which captures a snapshot of the man he is, the road he’s travelled and the lessons he’s learned all set to a minimalistic yet purposeful production.