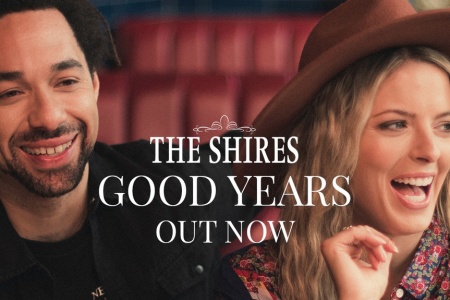 The Shires are arguably the most successful British Country act in Britain. It’s hard to believe that their fourth studio album ‘Good Years’ came out a little over a year ago now but despite their set at C2C being cancelled and their tour being postponed, the streaming figures for ‘Good Years’ are higher than their previous albums and Ben and Crissie have found plenty of ways to keep busy! On April 10th the duo will take to the stage once more to deliver an online show via Stabal, we caught up with them to find out how they’ve been preparing and how they’ve adapted to the situation we’ve all found ourselves in during this past year. We also had a little bit of fun finding out what flavour of crisp we all were!

Good Years came out over a year ago now, normally you’d bring out such a great record like that and follow it up with a tour which you haven’t been able to do for obvious reasons so what has that been like for you?

Ben: The week leading up to the release was the weirdest thing, because we were asked to fill in for Old Dominion on the Main Stage at C2C. Looking at that on paper, we were thinking this was going to be the best release ever for us; we had this huge opportunity to play the main stage, the tour was coming up and we were in a hotel opposite the O2 as the announcement was made that C2C wasn’t happening. We were joking in the rehearsal room a few days before, saying “Will we ever play a show again, together?” But I think we thought in another three months things would be back to normal. The album came out, it went to number three and it was incredible but there were no opportunities to play it anywhere, it felt odd! It’s only when you tour that you see the songs that have really connected, it’s often not the songs that you think it’s going to be. Theres no real closure, it’s like a relationship that’s petered out but never really ended. We’re very proud of the album itself but we want to go out and play it!

You were both involved in the writing process of the title track ‘Good Years’, which is my favourite song on the record, can you tell me a bit about the story behind that song?

Crissie: We wrote that with our buddy Canaan Smith. We arranged the session and went out for a couple of crafty beers mid-way through, then came back and carried on writing. Canaan came up with the idea of ‘Good Years’ being like tyres, in relation to driving but equally, in the same breath, we felt like our careers had been incredible so far, we were up on really good years. It was ironic that we released that song and it was the album of… I’m not going to say the worst year because some great things happened, but it wasn’t necessarily a good year!

Ben: Firstly we’re missing Nashville massively! The producer of our Apple Music Radio show is based out of Nashville so we do feel that connection. I’ve still been writing with people in Nashville, LA and the UK over zoom. The first session I did was very strange as you have this natural delay and there’s no vibe. Normally when you’re in a room you can hear the music, you can feel the music and you think of things you can do up on stage. On these zoom writes, you have to give each other space, its very different but it can sometimes be better. I’ve been writing after 6.30 when the kids have gone to bed and I’m exhausted but I write better songs when I’m tired. On zoom though, you’re almost a little more academic about it which can give you better lyrics and that’s the most important thing in country music. Two years ago, I could never have imagined doing that, but it’s been good.

Crissie: We had an email to tell us our Esta’s have run out, that’s really hit us hard today haha!

I bet! You mentioned your apple music radio show there. I know you’ve filled in on the radio before but that’s a different side of the industry, having a regular show like that. Have you enjoyed having the time to explore that side of things more?

Crissie: Absolutely, we both agree that we’ve gone back to being fans of music again. Sometimes when you’re so busy jumping from here, there and everywhere, you don’t get a chance to sit down and listen to what’s new and what’s current. There’s been some incredible albums released this year and it’s been really nice to dive deeper into those albums. We also have this segment called Jukebox Duel where we both take a legendary country artist and go through their back catalog. We’ve gone through Dolly Parton, Faith Hill, LeAnn Rimes – people that we love but we haven’t necessarily heard that album track of theirs so we have the opportunity to dig into some of those songs. Some are really old school and there’s more current artists such as Maren Morris and Kacey Musgraves as well.

Have you taken up any new hobbies during lockdown?

Ben: You got some WD40 on your rowing machine didn’t you?
Crissie: Yeah, I got the rower out which I’m very excited to use each day. I’ve been enjoying cooking quite a lot, making all kinds of different foods. I enjoyed getting out in the garden in spring and summer of last year and exploring the local area. There’s a village veg place where I pick up locally grown veg, it’s just nice to live in the same place for a long time, and spend some time at home!

You’ve got a show coming up on April 10th, how’re you feeling about that, is there an element of nerves surrounding it as it’s been so long?

Ben: Massively! We’re probably a bit rusty, it’s one thing singing at home and around the house but the songs we sing are quite high, there’s a lot of energy so we’re definitely nervous. The thing that’s exciting though is that, Stabal, the company that approached us, the quality of their shows is impressive. When you say livestream, you have a definite idea of what that is and it’s not necessarily a positive image you have. The way Stabal do things is different, they have lots of different cameras and the audio is high quality and that was important for us. People are paying money, we don’t want them to feel like they’re getting anything but the best of us. We’ll change some of the songs a bit and talk about the stories behind them. I just hope people really love it.

A few silly questions for you now, if you was to describe yourself as a flavour of crisp what flavour would you be?

Crissie: I’m pretty sure you can get dill pickle crisps in America so that would sum me right up, or a Quaver because I can be totally cheesy sometimes! You’d be a flame grilled steak or something like that.

Ben: That’d be Kip Moore not me! I’d be Thai Sweet Chilli by Walkers, they’re so consistent – I’ve never had a bad bag of them. So I’m consistent and with just enough spice.

Crissie: What would you be Zoe?

Zoe: I’ve not thought about it myself, I just ask the questions! I’d probably be a cheesy wotsit or prawn cocktail.

If there was a movie made of your lives, who would you each cast to play you?

Ben: This is so horribly arrogant because I can’t even act but I’d say myself. They can do all kinds of things now, they can make you look younger so when I’m 55 I could still play myself at 30. I’ve thought about this a lot! Deep down I think I have this thing about acting that I don’t know about because I’m pretty terrible at it haha but I believe I can pull it out the bag, it can’t be that hard to play yourself!

Crissie: I’m going to go for Sienna Miller, I feel like we have a similar look and she’s already an actress, so I’ll leave her to do the job!

Finally I know it’s hard to plan but what’s next for you?

Crissie: I reckon it would be nice to do another album at some point, possibly before the tour. We’d like to get out on the road before next year really, maybe something acoustic but until we’re allowed out I guess we can’t do very much, just keep working from home!

Read the review of ‘Good Years’ Here! Tickets for the online show can be found here!