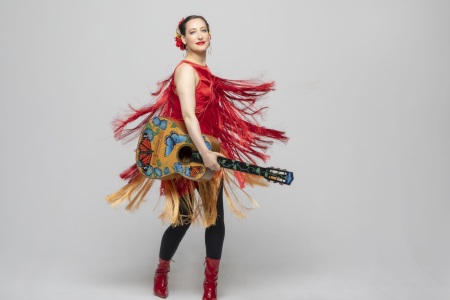 After recently touring with Imelda May, independent artist, Rachael Sage sat down to tell us all about her new song ‘Revelation Ground’ and where her love of music began.

I honestly can’t remember a time when I didn’t want to be a musician. One of my earliest memories is coming home from seeing the Broadway show “Oklahoma” and playing the score by ear on our family piano. It just seemed totally natural and somehow my fingers knew where to go even though I’d never taken lessons. For me, the piano was just a natural way of perceiving the world around me and expressing my emotions, and I would sit at it with my legs dangling off from 3 years old, improvising melodies and sounding out songs from the radio or whatever mg parents were playing in the house. So I guess music chose me!

Country and folk music is all about storytelling, can you tell me about your songwriting process and

in particular where you draw inspiration from lyrically?

I’ve been songwriting for decades now so honestly, I’ve approached the craft from many angles and my process really varies. Sometimes I go to a keyboard or a guitar and start playing with a chord progression and then some lyrics come to me and then I build a story around that initial idea. Other times I begin with a title or a specific philosophical or historical concept, and the lyrics lead the process. Sometimes I use the Beatle-esque nonsense word approach where you just sing a phrase or word that sounds good and refine the meaning of it later. There are certainly ways that as a writer you can learn to tap into the Muse and for me that’s often taking a walk, looking at paintings, reading a novel or seeing a movie. I’ve written songs sparked by conversations I’ve overheard in cafes or by meeting strangers on trains or airplanes. This way of perceiving the world – seeking the extraordinary in the ordinary – keeps me sensitised and sharpens my observation skills so I don’t take details or interactions with interesting people for granted.

I’ve heard that you have written jingles and music for film, how does your mindset and process

change from writing something like that, to a brief perhaps, and then writing a song for your own

Some of the first work I did as a professional musician was composing and performing jingles including spots for Gillette, Crystal Light, Sprite and Optima Shampoo. It trained me well as an arranger and producer I think. During those years I met some of the very best musicians and engineers in New York City, and still work with several, to this day! Writing music for film, TV or theatre is all very different but relies on similar skills. You’re serving the scene, whether it’s live performance or filmed…it has to be supportive but not overtake the visual. I’ve written songs for films or had film companies want to use my songs with slight adjustments to the track (such as the film “Fame”). For “Dance Moms” I recorded and arranged my song “Happiness” with the show in mind, which was fun and I’d love to do more work like that. For my own records, I write songs and create albums because I love doing it, because I need to be creative to stay sane, and because I always want to learn and improve as a musician and a writer.

Can you tell me the story behind your song ‘Revelation Ground’?

I composed “Revelation Ground” in the early months of the pandemic, during which we were all in lockdown and most people I know, myself included, were struggling with a sense of confusion and chaos as the world we’d known had changed dramatically – for worse but also in some ways, for better. The song reflects the seasonal nature of all things, including sorrow, mourning, and – reflecting the protests against police brutality and the murder of George Floyd – the fight for a more just, more compassionate future. Lyrically, the song was inspired by Pete Seeger’s “Turn, Turn, Turn” (made even more famous by The Byrds), which directly quotes the Old Testament and reminds us that sorrows will pass with time and hope will spring from future joys.

What’s the proudest moment in your career so far?

I don’t really orient to my career that way, for whatever reason. Maybe there’s something wrong with me but I’m just grateful I haven’t “quit”. As much as I love it – and that love knows no bounds – the life of an indie touring musician can be grueling and demands a lot of sacrifices. A few years ago I was diagnosed with cancer and had to take a full year off performing just to get through my treatment and recovery. So maybe my proudest moment should be the instant I decided I would beat cancer and get back to doing what I love! I suppose it’s ok to be proud of remaining optimistic that I would eventually recover and tour again. And here I am! Amen, hallelujah.

This summer Ill be doing a bunch of headline shows, Pride and folk festivals throughout the UK and Ireland, as well as playing some US festivals. Beyond that, I am excited to complete my next album, which is well underway; I’ll be chipping away at that this Fall, when touring slows down. I also just moved to a new home so I have to furnish it! I’ve been too busy playing shows overseas but basic things like getting a bed, a couch and some chairs would probably be wise haha.